ABOUT ME | The Anthony Amos

Anthony’s philosophy with everything he does is that the entire family are incorporated and involved! His wife Rachel is an integral part of all businesses and their children attend business meetings and events to get a taste and understanding of what being an entrepreneur entails! It’s an exciting adventure for everyone.

On Fyre in every direction! 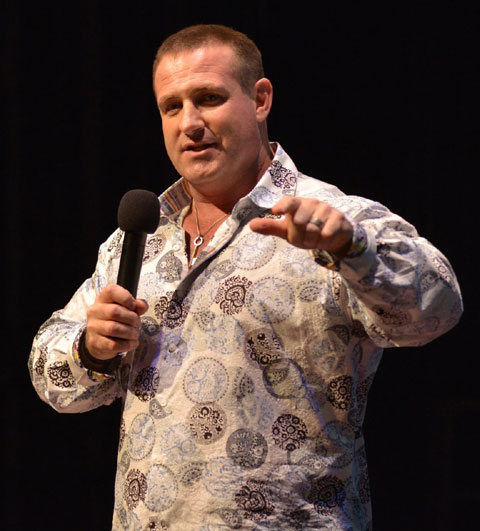 Anthony Amos started his career playing professional rugby straight out of high school in Australia. While playing football Anthony decided to use his down time to start his own business, so at 21 he and his younger brother founded a mobile dog grooming business. Their ‘prototype’ grooming trailer consisted of a secondhand hydro-bath (special dog bath) strapped on to the back of a box trailer! They put an ad in the local newspaper, rented a mobile phone and they were on their way!

The dog grooming business – Hydrodog – took off! One trailer turned into 2 and 2 into 7, the brothers had a mobile dog washing round each and they had 5 employees. Unfortunately the employee model didn’t work as anticipated as the employees didn’t have the same drive or passion to battle the elements and meet the high demand the business was now experiencing. This forced the brothers to change course and adopt a new model, they chose to franchise the business and directed their focus on selling franchises in their home state of Queensland.

Within 5 years Hydrodog had grown to over 100 franchises across Australia. It was the first franchise of its kind to be in every State and Territory of Australia. After the 100th franchise mile stone was reached, Hydrodog implemented a Master Franchise model taking the franchise system to the next level. All state and territories in Australia were sold within an 18 month period.

Anthony and his team revolutionized the dog grooming industry by designing and creating a fiberglass mobile grooming salon in the shape of a big blue dog. To this day after 10 years there is no other product like it in the market place. Hydrodog grew to the largest franchise of its kind in the world and Anthony at the age of 28 became one of Australia’s youngest millionaires.

In 2006 the brothers decided and it was time to sell Australia and NZ. Hydrodog was sold for a record sum and still remains the largest franchise sale of its kind in the world. There are now over 200 franchises throughout Australia.

After the sale of Hydrodog Australia & New Zealand, Anthony immersed himself in property development. Two of the larger deals were a 1200 lot sub division in North Qld Australia and a 3 stage unit development with an operational works status for a 67 dual and triple key Ramada resort.

Anthony found that his passion wasn’t in property so in 2010 he decided to move to the US with his beautiful wife and 3 amazing children (5,6,7) to expand Hydrodog into the American dog grooming market. After 2 years establishing the business model and getting the big blue dog manufactured in America, Anthony sold his interest in Hydrodog USA.Today Anthony is busy building two franchise systems in the USA!  Bellebrations is set to Launch in October in New York City and the KPI franchise system will launch later in 2013. Anthony has put together a world class team and his vision for these new ventures is to be  global franchise systems within 2 years.

Get The Book Now
